windy, rainy, stormy — and now over!

We survived non-hurricane Rick.  But wow, it was quite a storm.  So in terms of what storm categories mean,  we now have an understanding of Tropical Depression and a Tropical Storm. I don’t have any desire to get to know Hurricane!

It started out Tuesday with rain pretty much all day long.  It felt like we were back in Washington – just the constant drizzle contrasted with periods of heavier rain.

The Plaza de los Leones was a mess!

In the early morning of Wednesday the storm started.  Crashing rain, howling winds, screeching, banging, the whole thing.  Paul slept while the dogs snuck onto the bed but I roamed the house, checking on windows that worked themselves loose and investigating weird sounds.  Finally I sat with my audio book and knitting and knit until daybreak.  The storm kept on an on and on.  There were lots of big up and down winds (I think they are called micro bursts) that are quite strange.  Most of the plants on our upstairs (very exposed) patio were weathering it pretty well, except for the trees.  The eucalyptus, orchid tree and one of the bananas were over on their sides.  The fountain rain gauge showed we had about six inches of rain.

More mess at the Plazuela Machado

Around six or so the wind stopped.  By then Paul was up and we decided we were lucky to still have power (it had gone on and off all night but just for a few minutes at a time) so we made some coffee and unbelievable read the paper that had been delivered.  We were pretty sure the calm we were experiencing was the eye of the storm passing above us.  What a feeling! 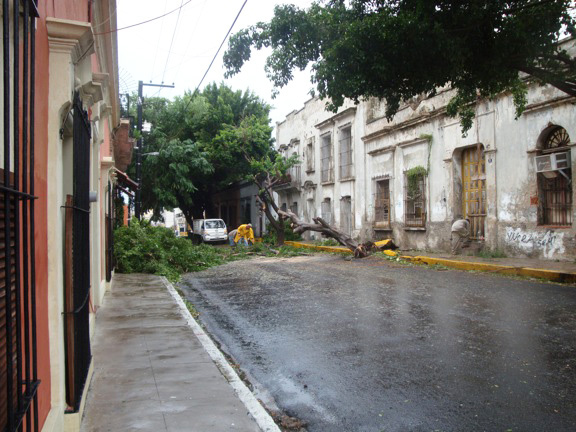 And then it started raining, big ten peso size raindrops to warm up to more deluge and a roaring storm that can’t even be described.  I had heard the freight train noise described for hurricanes before, well we heard it yesterday, for sure.  We heard glass breaking as windows on the ruin across the street flapped.  Tinaco lids flew.  Our three story tall bamboo broke off and flew.  The top of the next door avocado tree broke off and flew.

Around town, many trees went down and there were lots of broken windows.  Favorite bar Puerto Viejo lost its roof and mysteriously had a surfboard imbedded in it.  The storm raved for a couple more hours and then finally it seemed like it might be over.  Paul and I headed out to see what was going on around Centro.  The waves at Olas Altas were incredible.

We walked around, talking to everyone about the experience and what we all needed to do to clean up.  And then we headed home to clean up at our place.  We’ve made a dent in the mess, four big plastic bags so far and I haven’t even started on the bamboo or the bougainvillea.  Towards dinner time we wanted to take a drive and see what the rest of town looked like, and lo and behold Zab Thai was open so we had Thai food at the end of a historic day.

The newspaper has a very good video on You Tube of the storm.

Day of the Dead in Mazatlán 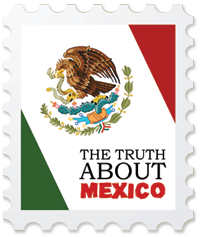 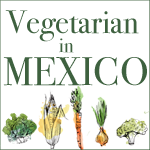